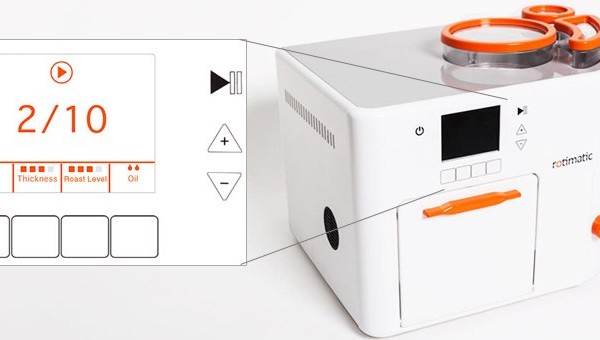 A Husband-wife duo of Indian-origin and based out of Singapore has received a whopping $11.5 million as second round of investment for their innovative one-minute robotic chapati (a flat bread) making machine touted as World’s first robot that makes fresh home-made rotis and wraps.

Pranoti Nagarkar, a mechanical engineer from the National University of Singapore, came up with a prototype for an automatic roti maker which won her the “Start-Up Singapore” competition in 2009.

Essnetially, Rotimatic is a technologically advanced automatic flatbread making robot. A timesaver, Rotimatic can produce up to 20 fresh healthy rotis in one go, one roti per minute, with options for oil, thickness and roast levels. The machine is a compact robot designed to fit elegantly in a modern kitchen, weighs 18kg and measures 40cm x 40cm x 45cm.

Rotimatic makes rotis by creating individual dough balls using its patented adaptive technology, presses the dough into a flat roti and then roasts each roti until puffed deliciously.

Within a week of the launch of its beta version last year, $5 million worth of roti makers priced at $999 each were sold in US and Singapore market and Zimplistic had to close pre-orders.

Rotimatic is not available in the retail market yet, interested buyers however can leave their details at the company’s pre-order List to be informed about when Rotimatic is launched in their respective country.

Currently, there is a huge waiting list for Rotimatic and over 5,000 requests across the globe that amounts to $72 million are pending for distribution partnerships with the startup.

“With this funding, Zimplistic plans to finish the Rotimatic beta, accelerate manufacturing rollout and set up operations in international markets to fulfil the big demand,” said Rishi, co-founder, Zimplistic.