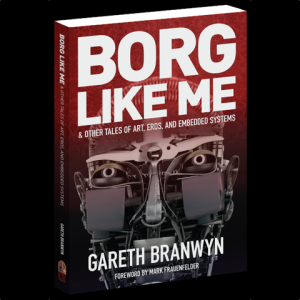 Take a smart, passionate, intense trip along the bleeding edges of art, technology, and culture at the turn of the 21st century.

Borg Like Me is a comprehensive collection of cyberculture pioneer Gareth Branwyn’s best work, covering everything from his youth in a hippie commune to his involvement in the 90s zine publishing scene, to his tenure at influential cyber arts and culture magsMondo 2000, bOING bOING, and Wired, and his eight years with MAKE, spearheading the growing maker movement. Previously published material is woven throughout with Branwyn’s painfully honest commentary and personal stories, and there are also many original pieces. The book is beautifully illustrated with over thirty drawings, photos, and other artworks, from such talented artists as Shannon Wheeler, John Bergin, (Academy Award-winning) Stéphane Halleux, Danny Hellman, Terri Weifenbach, Mark Frauenfelder, Lea Redmond, Greg Brotherton, and Jeremy Mayer.

In Sparks of Fire Press’ first major offering, Borg Like Me And Other Tales of Art, Eros, and Embedded Systems, cyberculture pioneer Gareth Branwyn (Boing Boing, Mondo 2000, Wired, MAKE) presents a compelling collection of his best work. Released in September, 2014, this collection gathers and expounds upon Gareth’s 30+ years of covering art, technology, fringe culture, and DIY. New content is woven between previously-published material while lengthy intros put everything in context. Borg Like Me is beautifully illustrated by such artists as Shannon Wheeler, William Barker, Mark Frauenfelder, Danny Hellman, Nemo Gould, and more. 30 illustrations.

There are no reviews yet.

Be the first to review “Borg Like Me” Cancel reply